For universities and higher/further education establishments, recruiting new students and raising awareness is core to strategic planning. However, gaining stand out can be a challenge for university marketing teams.

The effective application of new and emerging technologies as part of a wider marketing strategy can deliver this point of difference. It was this that the technologically forward-thinking marketing team at Edge Hill University had in mind when they approached Mashbo to help validate their ideas to integrate Virtual Reality (VR) into the University’s plans. The client was keen to have something more innovative to showcase the University in order to generate more interest in schools where they were keen to recruit from. 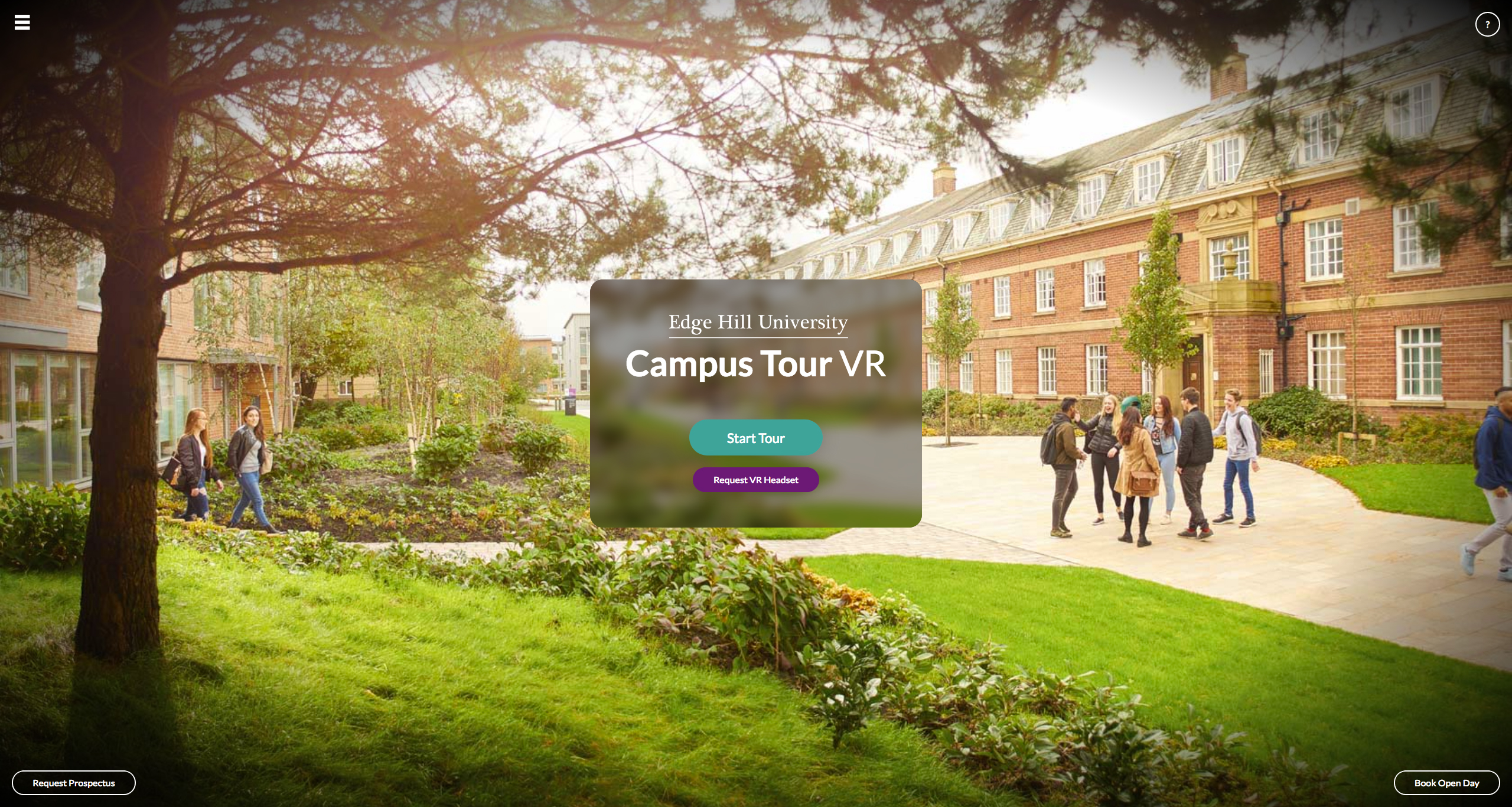 The team had seen VR in action at higher education marketing expositions, but based only around static concepts and wanted to test their idea to create something more interactive, which would bring users into a 360-degree virtual recreation of some of the university’s key buildings and faculties, while also driving response to calls to action, such as ordering a prospectus or signing up for open days.

The team at Mashbo had already worked on a 360-degree VR project for a historical education client, which acted as proof of concept for the Edge Hill University team’s idea. What followed was a series of discussions and workshops with the client team to fully dissect the brief and agree on the business objectives that the technology needed to deliver on. 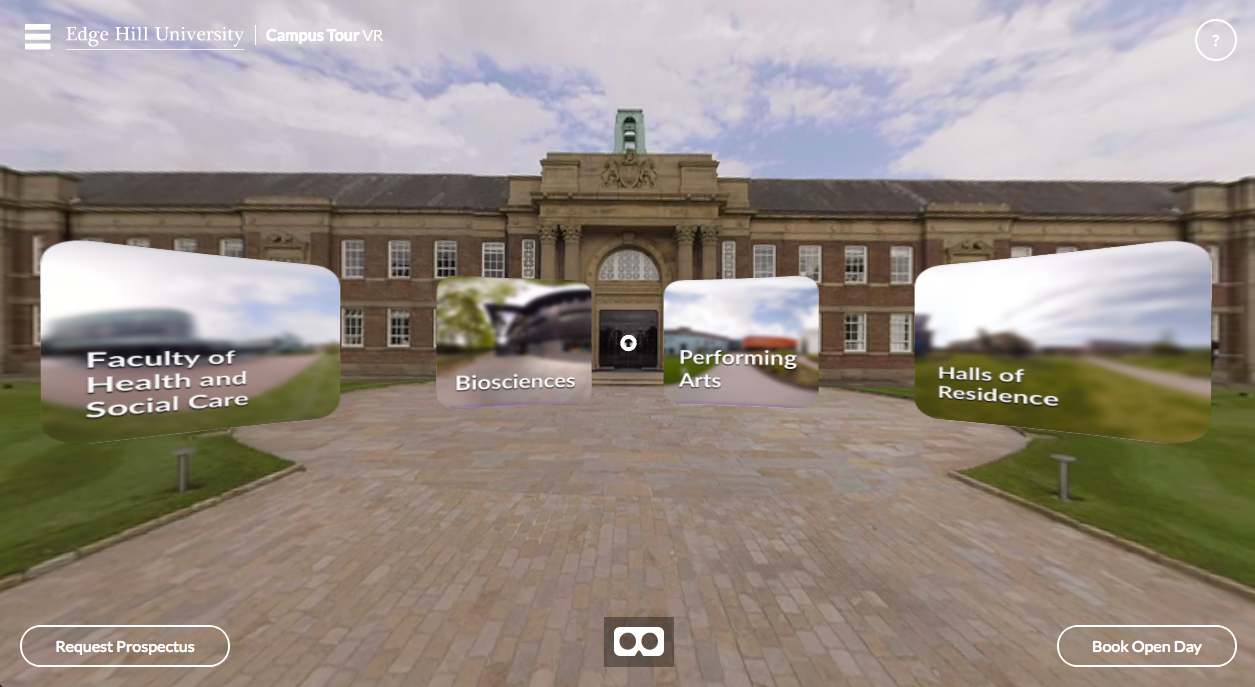 One of the key requirements was that the solution needed to be browser based and able to be used without a VR headset, ensuring it was accessible to all potential applicants from anywhere in the world. 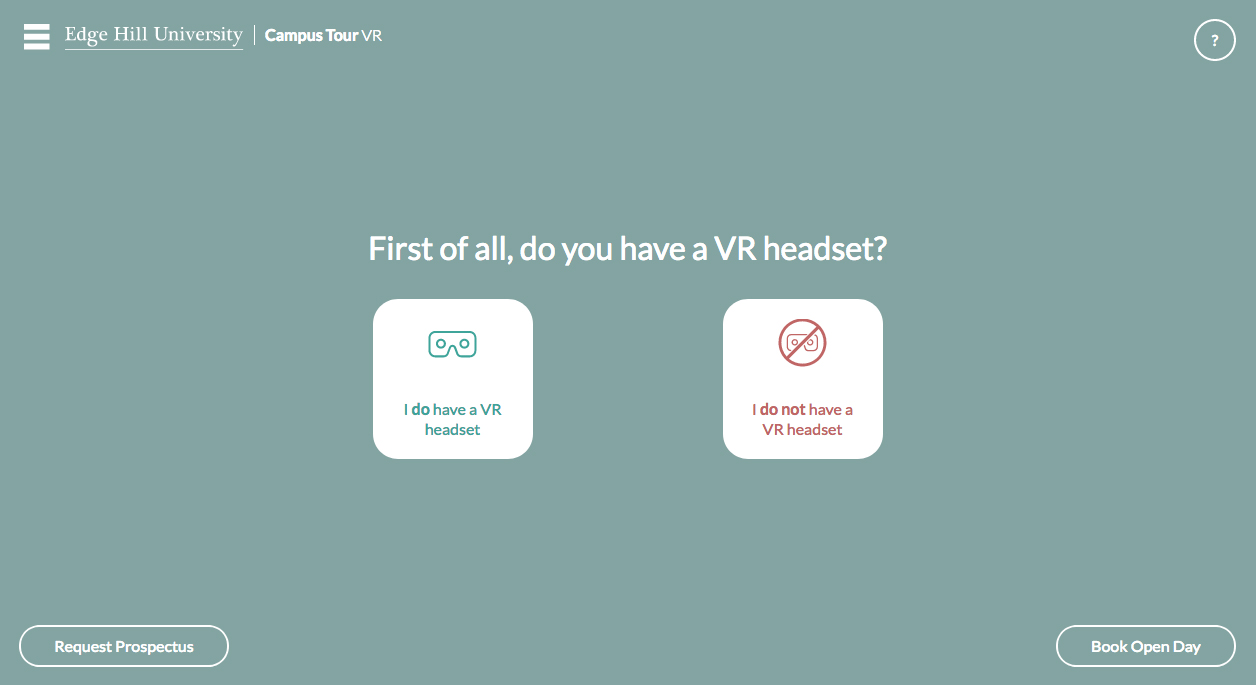 Using Ember as the JavaScript (JS) framework and Mozilla’s A-Frame library, as the VR framework, we ensured a level playing field and a smoother build process across multiple browsers.

Using video instead of 3D content also presented a number of interesting challenges, as users are unable to autoplay video on mobile devices. To avoid users having to continually press play at different stages or being required to take a headset on and off if they are using one, we created a one-press play button. The team at Edge Hill worked with videographers from Yeti and the team at leading UK drone operator, Ironbird to film footage at six sites across the University’s campus, including Creative Edge, Performing Arts and The Faculty of Health and Social Care.

The footage collected included 360-degree shots and ground-level moving shots to create a fully immersive experience for users. This means that rather than being stuck in a fixed point in the middle, users can move around freely in the virtual environment.

Both suppliers provided footage in mp4 format and worked with us to balance the file size to prevent buffering. Amazon AWS was chosen for the project as it automatically handles setting up the files for streaming and efficient buffering.

As well as a fully interactive and immersive VR tour of key University sites, the technical delivery also included a bespoke admin area.

Working with emerging technology like VR from a design perspective also gave our team some interesting challenges to navigate, as many mainstream design programmes are created to design in 2D, not 3D. 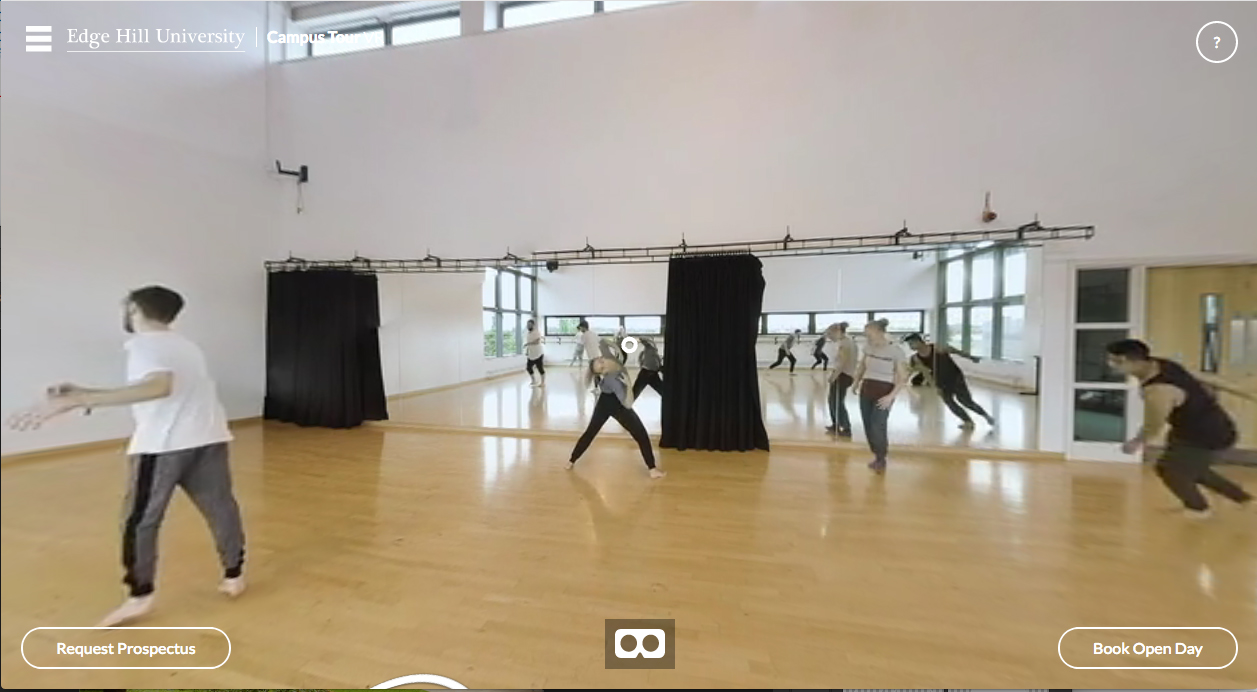 This means it really is the ‘wild west’ of design, so new that you’re out there on your own. Our approach to this fresh challenge was to storyboard the project like a film rather than wireframe it like a website. This meant we could put users at the heart of the action and signpost them to key data capture points that delivered on the University’s business objectives for the project.

Sam Armstrong, Head of Marketing and Creative at Edge Hill University, said: “We are looking forward to the reaction from the first burst of activity of this campaign and will be hoping to roll this out further with a plan to film more 360 video and make it available via the app.”